This application combines a number of computational tools with FabSim3 from the VECMA toolkit to enable reproducible execution of an Uncertainty Quantification (UQ) workflow applied to a dynamic earthquake simulation. The earthquake simulation is run with fdfault, a high performance parallelized finite difference code for solving elastodynamic earthquake rupture simulations. A model calibration workflow is implemented using the mogp_emulator package, which employs a surrogate modelling approach based on a Gaussian Process emulator to explore the input parameter space of the simulations. The entire workflow is combined together using a FabSim3 plugin fabmogp to run an ensemble of earthquake simulations and carry out the UQ analysis. All software in this workflow is publically available on Github, and we have provided a number of resources to describe the methods and provide an easy to use implementation based on a Docker container.

The demo uses a model calibration approach to explore the input space of an earthquake rupture simulation. An example simulation using a fractal nonplanar fault is shown below: 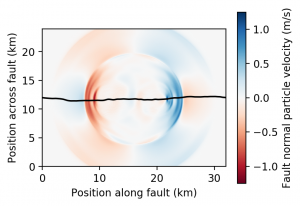 This diagram shows the ground motions from a 2D simulation, illustrating how the rough fault geometry causes variations in the ground shaking and rupture propagation along the fault. Because the fault is fractal, it can be shown that the smallest bumps have the largest effect on rupture propagation, making this a classic example of a multi-scale simulation where the small scale dynamics govern the large scale model outcomes. These types of problems are prevalent in a number of fields in the physical sciences, including turbulence, climate, volcanoes, tsunamis, nuclear fusion, and other complex systems.

To perform a physics-based simulation of an earthquake, one needs to know the elastic properties of the rocks in the earth, the geometry of the fault in question, the frictional properties of the fault, and the initial stresses on the fault. Among these, the initial stresses cannot be estimated in the earth using seismic observations, but the stresses play a key role in determining the size and ground motions in an earthquake. This model calibration approach attempts to use the earthquake size, which can be measured easily using seismometer observations, to constrain the possible values of the stress tensor on the fault.

The fabmogp plugin automatically executes an ensemble of earthquake simulations by drawing samples from the input space and then running the simulations using FabSim3 to curate the runs. The plugin also automates data collection and performing the analysis using the mogp_emulator package. A diagram illustrating the simulation workflow is shown below: 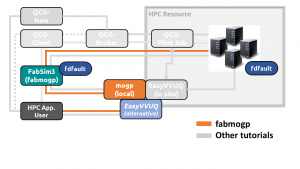 Alternatively, the simulations can be analysed using other UQ approaches such as those provided by EasyVVUQ. Future work will ensure that users can easily choose a variety of UQ methods and easily integrate them with the FabSim3 plugin to run the earthquake ensemble simulations.

An in-depth tutorial describing this workflow, including links to a Docker image that installs all needed software and dependencies, is available here. Additionally, a conference paper on this work is under way, and the article text, scripts, and the computational environment in which the simulations were run is available here.

This collaborative work was carried out between Derek Groen, Hamid Arabnejad, and Imrah Mahmood at Brunel University through the VECMA project and Eric Daub at the Alan Turing Institute. The Turing work is supported by two Turing Fellow projects on Uncertainty Quantification led by Prof Serge Guillas at UCL and Prof Peter Challenor at Exeter. Work to develop the earthquake simulation code was carried out when Eric was at the Center for Earthquake Research and Information at the University of Memphis and was supported by grants from the Southern California Earthquake Center and United States Geological Survey Earthquake Hazards Program.